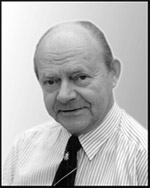 In the meantime this message has been travelling around the world. Udo Rudolph, owner of several honour dignities and the Nestor of the Uranian Astrology (Hamburg School) died unexpected on the 13th of October 2008, shortly before 9 AM in Hamburg/Germany. On this occasion I would like – also in name of Udo’s sister –my mother- to thank all the friends for the telephone calls, Emails and letters. My gratitude goes to all those friends in Germany, Europe, America and Asia. Special thanks to our personal friends who are organised within the IUF.

Udo was born and brought up with astrology. At the moment of Udo’s birth his father Ludwig Rudolph was already a well known astrologer. Udo’s parents met through astrology – his mother was an astrologer, too. It doesn’t surprise therefore that Ludwig Rudolph observed his son’s birth in detail and registered his birth time at exact 1.21 PM.

Udo was born in Osterode/Germany on 14th of December 1921. The Hamburg School was not there yet, although 1919 Alfred Witte had already introduced his Astrology as guest lecturer in the Hamburg “Kepler-Circle”, where Witte met his later closest co-worker Ludwig Rudolph. After a residence in Osterode the Rudolph family returned to Hamburg in 1924, giving a special dynamic to the institution of Witte’s Astrology. Soon one year later the Astrologer Association “Hamburg School” was founded. Like in the Kepler-Circle before, the management was represented especially by Friedrich Sieggrun and Ludwig Rudolph. Son Udo grew up and also the so called “Hamburg School” grew rapidly.

At the age of 14 Udo calculated for the first time a horoscope without knowing yet how to interpret. Alfred Witte though was conscious that Udo would eventually introduce the Witte-Astrology into the world. Udo felt this at a later age as his duty, although he noticed already as a youngster that astrology wasn’t acknowledged everywhere. His interest however was in sports and he wanted to become a teacher of sports.

The horrible events of the Worldwar II effected Udo profoundly. As an American prisoner of war where he was engaged as translator, Udo started an intensive spiritual quest.

On the 9th of January 1948, Udo returned home from captivity on his father’s birthday. 14 days before the Association was re-founded under a new name: “Astrological Study Society Hamburg School (Witte’s System)” and Udo came right in time to cooperate with the rebuilding of the Organisation, which was forbidden before.

In the publishing House of his parents Udo started his education as a Bookseller (February 1948) and study of astrology (September 1948). The spiritual quest was more important for Udo than the astrological quest. After a short period of activity at the Rowohlt’s Publishing House, Udo swapped in 1953 over to the Hamburg Aviation Construction HFB, today EADS (Airbus).

After some detours Udo found in the late fifties his destiny: he found in Agni-Yoga a spiritual doctrine that also accepted astrology. Therefore his astrological interest was strengthened at the same time. In 1964 Udo published his first astrological article. A few years later he started to teach. In the early seventies Udo began his first trips to England, USA and Thailand and presented the Witte Astrology, representing his father, right in the homecountries of the befriended partners.

In the year 1976 Ludwig Rudolph retired and conveyed the management of the Witte’s Publishing House to Udo as well as the chairmanship of the Organisation. Udo directed the Organisation for more than a quarter of an age until 2003. After his retreat out of the Organisation and the transfer of the Publishing House to the next generation, Udo started an International Study group HSARC (Hamburg School Astrology Research Centre) who gathered for the first time in 2006 at the First International Conference in Bologna/Italy.

At the second International Conference in The Hague/Netherlands in 2007 Udo proposed to intensify and strengthen the cooperation and suggested to find a new name for it. This was the moment of birth of the International Uranian Fellowship (IUF) that gathered for the 3rd Conference in Riga/Lativa in 2008 and will gather again for the 4th IUF Conference 2009 in Hamburg/Germany (www.i-u-f.org).

90 years after the moment that Alfred Witte introduced his Astrology for the first time in public, we will return –also in memorial of Udo Rudolph – back to the source and spot of origin.