We remember our co-founder 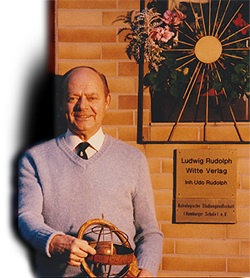 In 1976, Udo was successor of Ludwig Rudolph, as the chairman of the Astrological Research Society (Hamburg School) [3] Udo held the chairmanship for a 25-year period and received - as the third member of the family - the honorary membership of the society. But he returned his membership later in protest, because the new board continued the society non-compliant with statutory rules.

Instead to sat and rest, Udo Rudolph carry on his astrological researches in an international group. In The Hague (20 May 2007), he made the proposal to form a group with a new name, this was the birth of the International Uranian Fellowship.